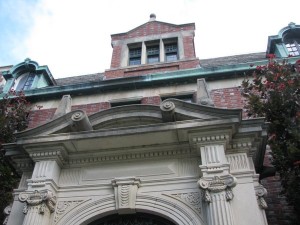 See photos of the property in “Read more…” and in Photo Gallery October 7, 2011 by Christine Yeres

After nine years of appearances and applications before New Castle’s zoning board of appeals, the 98-acre Legionaries of Christ property at 773 Armonk Road (Route 128) is for sale.

Before the conservative Catholic order purchased the mansion and property in 1994 for $3.12 million, it had belonged, successively, to songwriter-lyricist Billy Rose (“Me and My Shadow”) the Catholic Sisters of the Cenacle, and to the Unification Church.

Its religious and educational purpose makes the property tax-exempt except for New Castle special district services such as advanced life support and water.  For those services, the organization has paid annual taxes to the town ranging from $2,312.04 in 2002, to $2,907.38 in 2007 and $2,442.03 in 2011. The property does not have sewers, but operates on septic.  The property is situated in the Bedford Central School District.

Most recently, the Legionaries property has been used as a spiritual retreat center and for marriage-prep courses (“Three to get married”) under the name of “Our Lady of Mt. Kisco Retreat Center.”

1995-2004: a proposal before the zoning board to increase the existing 70,000 square feet by 315,000, creating dormitories and classrooms for 460 seminarians, teachers and staff

2008: withdrawal of the seminary plan and focus on an old IBM facility in Thornwood, to build at 3,000-student liberal arts college, “Westchester University”

February 2011: For sale—a pre-bid meeting and site tour of the property was offered

Founded in 1941 by Mexican priest Marcial Maciel Degollado, from the 1970s the Legionaries of Christ order was plagued with rumors of his misuse of funds and sexual abuse scandals until his death in 2008.  Various admissions and apologies from the Catholic Church followed.

The website announcing the property’s availability and soliciting “request for proposals” describes the parcel as “an opportunity for a unique development in an area with sustained value that is currently zoned for single family residential uses, seminaries, or retreats.  However, other uses are acceptable with additional approvals under the zoning code: college/university facilities, private non-profit clubs, places of worship and other uses.”

No price is mentioned, but the real estate agent’s text suggests that the property owner is willing to either sell or lease the property long-term, and adds that “priority will be given to those bidders who can close quickly with the most economically favorable offer.”

The New Castle Zoning Board of Appeals on a site visit two years ago: