A Greeley student’s view from inside Albany, sponsored by League of Women Voters 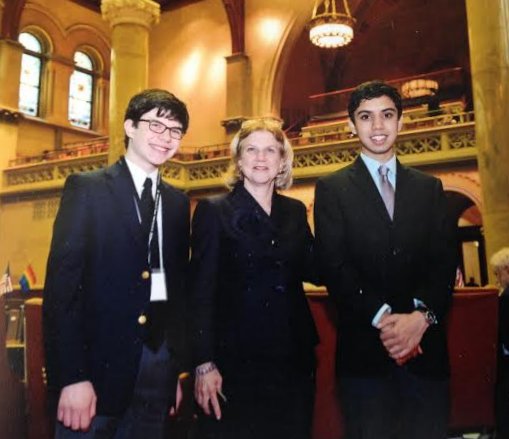 The Students Inside Albany Conference (SIA), sponsored by the League of Women Voters of New York State, is a unique opportunity for high school students to explore government, politics and leadership in New York State. The SIA conference brought together sixty students from all across the state to Albany. I was honored to attend this year’s conference. I met a diverse group of high school students who, like me, were all invested in honing their leadership skills to benefit their communities.

During my three days in Albany, I toured many parts of the capital. I was particularly fascinated by the Capital Building’s history. The Million Dollar staircase and 23-carat gold leaf lining the walls of the State Senate chamber were impressive, but I was more drawn to stories about the historical figures that walked the halls of the building. Our tour guide told us about Melvin Dewey, the director of the State Library from 1888 until 1906.

In addition to starting the Dewey Decimal system for book catalogs, Dewey tirelessly oversaw a growing library collection of over 450,000 volumes. Each year, Dewey warned that the library could easily burn down. The government and Board of Regents continually ignored him however, and shortly after Dewey left his position as director, the Library did in fact burn down in March 1911. This story left me pondering our legislators’ priorities and how one really makes change in Albany. The conference workshops provided some answers to my question, teaching about the variety of participants who influence the legislative process. Our schedules were packed with workshops led by lobbyists, journalists, and legislators. During one session I learned how to lobby effectively, which included skills such as including clear speaking and persuasiveness.  In another session, journalists who cover breaking political news taught us to see how public perceptions influence politics.

Of course, as a high school student, I was especially interested in the education reform groups who focused on the Common Core and school spending. Mostly, these sessions taught me that the legislative process is more than what happens inside the Capital Building. There are many parts to the system that allow the political process to work together in a cohesive manner. In addition, these workshops proved to me that effective leaders are not just the personable ones with good intentions, but also the ones who effectively leverage all aspects of the system. The most intriguing part of my trip to Albany was my time spent shadowing members of the Assembly and the State Senate. I shadowed Assemblywoman Shelley Mayer from Yonkers, who represents the 90th Assembly District.

The Assembly had a loose atmosphere. Assembly members walked the floor freely, making small talk, snacking, holding short meetings with lobbyists, and even checking Facebook. Assemblywoman Mayer took me along with her to lobby meetings where I was able to see the legislative process in action up close. At this particular meeting, Assemblywoman Mayer explained to the lobbyist that while she would vote yes on the bill being discussed, she was not ready to sign on as a sponsor as the bill did not directly affect her community and constituents.

Particularly in a reelection year like this one, it seemed to me that legislators focus mainly on their districts’ problems to please them. I also learned the difference between a resolution and a bill. While a resolution honors someone or raises awareness about a cause, a bill is voted on to become a law. Assemblywoman Mayer explained to me that the resolutions usually pass unanimously, unless an Assembly member is angry with one of the resolutions’ sponsors. I enjoyed absorbing the “wheeling and dealing” on the Assembly floor, and I recognized that people skills are essential to the political process. My experience in the Senate allowed me to see a different side of the legislative process. The Senate had a more formal and serious atmosphere. The senators mostly stayed put at their seats, listening to the readings of resolutions, which dominated the session time I observed.

I also saw how Senator Ball gives back to his community. Senator Ball presented a resolution recognizing an organization called Purple Heart Homes that works to provide disabled veterans with housing. Later, the League’s representatives explained to us that the Senate resolutions are an important mechanism for publicity, as well as shining a light on important issues. My visit to the Senate showed me that the legislative process involves self-promotion, but is mostly one of true community service. After I observed both houses of the legislature in Albany, I was most struck by how much the legislators’ actions were influenced by reelection goals. Because their tenures are only two years long and all expire at the same time, the process of becoming elected can at times overshadow real progress. I wonder why the Senator and Assemblymember’s terms are not staggered and if a change in the election process could increase the amount of progress made each session.

SIA was truly a life-changing experience for me. I saw that our state government is comprised of many different vibrant, multi-faceted institutions. Individual personalities play an enormous role in these institutions’ accomplishments. After my time in Albany, I am inspired to bring back the lessons I learned to Horace Greeley High School. As Vice President of Student Council, I want to combat apathy by giving different sectors an organized way of sharing their views. Student Council has already started our mission for transparency, beginning with setting up an email address where students can contact us directly. SIA has motivated me to think of even more tools to strengthen my own community, and I am grateful to have participated in the conference.

This 14th annual Students Inside Albany Conference took place from May 18th -21st, 2014, and brought together approximately 60 students from across the state to Albany to get a first-hand education about their state government. The conference gives students a hands-on learning experience about how state government works. Brandon had the opportunity to shadow Senator Greg Ball and Assemblywoman Shelley Mayer.