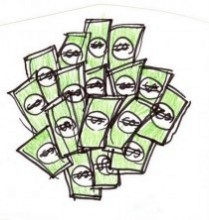 Editor’s Note: The Town Board has closed the public hearing on the budget and will vote to approve it on the evening of December 9. The League of Women Voters of New Castle will hold an information forum on the budget on Tuesday, December 9th at 9:30 a.m. at the Chappaqua Library.  Town Comptroller Robert Deary, Town Administrator Jill Shapiro and Town Supervisor Rob Greenstein will be there to explain the budget and answer questions.

For links to the budget, as well as Shapiro’s summary, click HERE.

Tweet
Comments(2):
We encourage civil, civic discourse. All comments are reviewed before publication to assure that this standard is met.

$50,000 to a consultant for Sabrina to remain in control of the master plan, something that she has shown us that she is not up to.  She does not have the experience to do this job, she is nothing more than Rob’s handmaiden. Towns that are serious about M.P.‘s hire real planning firms who do this work.  THAT IS NOT SABRINA.

I am fine with an assistant for her regular town work.  That is what she should be doing anyway.

Rob and team promised that they would do a master plan FIRST, BEFORE ANY DEVELOPMENT.  Going on a full year since they were sworn in it is the old story from them.

I repeat, HIRE A FIRM THAT DOES THIS WORK.