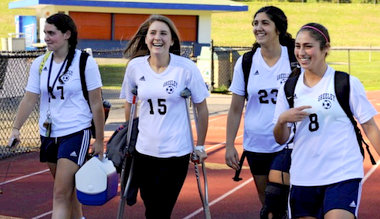 This fall, when my daughter, a senior at Greeley, sustained an ACL tear at the first game of the varsity soccer season, I chalked it up to the risks of participating in sports.  The following week, another teammate tore her ACL.  And then, over the course of the next three months, several more of Greeley’s female athletes tore their ACL’s – all requiring surgery and a recovery of at least six months.

It may not surprise anyone to learn that girls are 4-6 times more likely than their male counterparts in the same sports to tear their ACL’s.  But what they may not know is that exercise prevention programs have been shown to reduce this risk dramatically – by up to 80%.  This information isn’t new, but it hasn’t yet filtered down to the level of high school sports, where prevention exercises should be integrated as a routine part of team practices.  In the meantime, girls regularly sustain these devastating injuries.

On Tuesday, March 18 at 7:00 p.m., Dr. Jo Hannafin, a renowned orthopedic surgeon at the Hospital for Special Surgery, and Rob Fay, Clinical Director at Armonk Physical Therapy & Sports Training, will come to Greeley to educate the community about why female athletes are at greater risk of injury and demonstrate the exercises that can reduce this risk.

The Uneven Playing Field By MICHAEL SOKOLOVE Published: May 11, 2008 ~ from The New York Times

If you are the parent of an athletic girl and live in a community that bustles with girls playing sports — especially the so-called jumping and cutting sports like soccer, basketball, volleyball and lacrosse — it may seem that every couple of weeks you see or hear about some unfortunate young woman hobbling off the field and into the operating room. The first time, you think: What a stroke of bad luck. But you figure it won’t happen to your daughter because, after all, what are the odds?

After a couple of more A.C.L. tears in the neighborhood, you get worried and think, Gosh, we must be in a really bad cluster for these injuries. Why here? But in all likelihood, what you are witnessing is not a freakish run of misfortune but the law of averages playing out.

The Injury Surveillance reports include commentary as well as data, and in 2007 the authors stated that an A.C.L. rupture is “a rare event” and advised against making too much of the tears sustained by male and female collegiate athletes across a range of sports. But a young woman playing college soccer can easily generate 200 exposures a year between her regular season in the fall, off-season training in the spring and club play in the summer. Plenty of younger players, girls in their early through late teens, will accrue well in excess of that number between their high-school seasons, their club seasons — which often run year-round — and multigame tournaments on weekends and soccer camps in the summer. (The same is true in other sports in which girls play school and club seasons, including basketball, lacrosse, volleyball and field hockey.)

So imagine a hypothetical high-school soccer team of 20 girls, a fairly typical roster size, and multiply it by the conservative estimate of 200 exposures a season. The result is 4,000 exposures. In a cohort of 20 soccer-playing girls, the statistics predict that 1 each year will experience an A.C.L. injury and go through reconstructive surgery, rehabilitation and the loss of a season — an eternity for a high schooler. Over the course of four years, 4 out of the 20 girls on that team will rupture an A.C.L.

Each of them will likely experience “a grief reaction,” says Dr. Jo Hannafin, orthopedic director of the Women’s Sports Medicine Center at the Hospital for Special Surgery in New York. “They’ve lost their sport and they’ve lost the kinship of their friends, which is almost as bad as not being able to play.”

Marshall says he feels a sense of urgency, because without a better understanding of the injury, the situation will get worse in coming years with the great numbers of girls playing sports — and the frequency and intensity of their play.

“…the big concern for me is the girl down the street who wants to play soccer on the rec team or the travel team,” Marshall told me. “They’re ripping their knees up, and they shouldn’t be. There’s got to be a way to prevent it.”

My 13 year old daughter’s team, New York Soccer Club, has their players, aged 13 and up, take strength and training classes at COR in Armonk to prevent these type of injuries…it seems to be a good idea. Does Greeley soccer have a program to address these sorts of injuries?