FRI-SAT-SUN: Seven Bridges production of “Anything Goes” is ready to set sail! 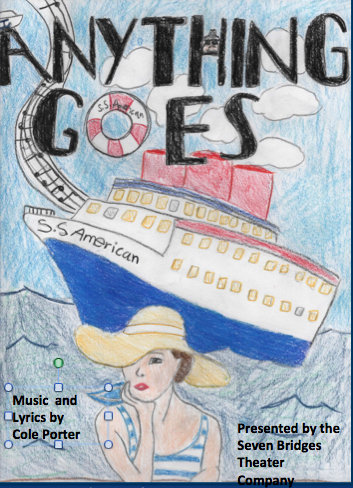 Get ready to board the S.S. American for a fun filled cruise as the Seven Bridges Theater Company gets ready to set sail with “Anything Goes.”  You will certainly “Get a Kick” out of the performances on Friday, February 7th at 7:30 p.m., Saturday, February 8th at 7:30 p.m. and a Sunday matinee, February 9th at 2:00 p.m.

The cast and crew has been rehearsing for weeks and 5th graders Ryan Spiro, Charlotte Harrison and 7th grader Mary Grace Sullivan can’t wait to sing and dance in front of an audience.  Violet Gautreau remembered her four years in the theater program.  She was a knife in “Beauty and the Beast,” a fish in “Seusical,”  Ursula in “Little Mermaid” and now she is Reno in “Anything Goes.” She feels it was really great to “work your way up and prove you’re up to the challenge of getting a lead part.”

Director Kevin Kearins thinks “This show is going to knock the socks off our audience.  I won’t be surprised if there is not an insurgence of audience members seeking tap instruction in our local dance studios.  Our own “dancing with our stars” here in Chappaqua.  You can’t leave this theatre without feeling good and humming those great Cole Porter tunes.  “It’s Delovely!”

And speaking of dancing, Choreographer Linda Carelli, assisted by Theater Co-Chair Aimee Gautreau, headed up fall tap lessons.  Many boys and girls participated. Linda said “I loved teaching the 6 week pre audition tap class.  Many of the kids had never tapped before and by the end of the session I was amazed with how much technique they learned. It made them more confident and relaxed at the auditions.”

Wesley Ford portrays Billy and Noah Hellman is Whitney.  Both eighth graders had always been on the tech crew working behind the scenes.  They decided to step in front of the spotlight and both earned lead parts.

Another eighth grader, Katie Katz is a reporter and flapper.  She loves to play characters “that aren’t really like her.”  And 6th graders Anna Karp and Paige Dalrymple and 8th grader Sydney Herzog thinks the best part is spending so much time with friends.

John Admunson, finishes his fourth year on the Seven Bridges Stage.  This year he stars as Lord Evelyn.  And he thinks participating in theater has been “wonderful and tiring.”  And another four timer Amanda Chin, who portrays Hope thinks “The cast is amazing and the big production numbers are awesome.”  Moonface Martin, also known as Jackson Gautreau, stated “Theater is a great way to express yourself.”  And 6th grader Ellie Leibner who portrays Bonnie, says “It’s not about what part you have, but, the memories you make.”

So get ready to Blow Gabriel Blow.  Vocal coach Sara Brett England thinks the audience will love the live orchestra.  “It’s really quite exciting, especially as some of these kids have never sung with one at Seven Bridges.  I’m a huge proponent of live music, as it’s truly the heartbeat of the show.  Not only does it give employment for musicians, but it can also inspire budding middle school musicians and allow them to see that musical theatre is a field to go into.”

Theater co-chairs Aimee Gautreau and Beth Dalrymple both think “Anything Goes” is the perfect show for kids and adults.  As Aimee puts it, “Huge production numbers, great singing and great dancing.  It’s Broadway close to home.” And Beth says “The kids give so much and I hope they receive a lot in return through this experience.”

So get on board as tickets are going fast. To order, click HERE.

Ellen Davis is a television writer, producer and director.  She is also the proud mom of Violet and Jackson Gautreau.

Can’t Wait! I hear the tap dancing is over the top.