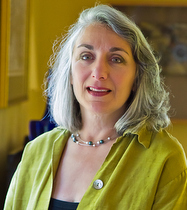 The Chappaqua Library has been awarded a Reading and Discussion Grant of $1,000.00 from the New York Council for the Humanities for a series led by Carol Durst, a New Castle resident and lover of all things food-related.  Entitled “From Farm to Table: Making Decisions about the Food We Eat,” the series begins Wednesday, September 19, and will be held once a month through December. The series is limited to 25 participants.

Readings will include a variety of fiction, nonfiction, essays and memoirs, and cover several aspects of food, including food production and distribution in America over the last two centuries.  The library will provide copies of books in the series (see the list, below), some purchased by the library, some borrowed from other libraries.

Throughout her career, Durst has taught at culinary institutions, consulted and held academic positions at NYU and CUNY, owned a catering company, and authored the cookbook I Knew You Were Coming So I Baked You a Cake. Carol was an obvious choice to address the current and intense interest in food in New Castle, as evidenced by the presence of a thriving Chappaqua Farmers Market, community gardens, and restaurants committed to serving locally sourced, healthy food.  Durst is known for both her discussion and dessert capabilities through the film series she leads at the Chappaqua Library called “Menus in the Movies.”

Discussions will be held Wednesday evenings at 7 p.m. in the Children’s Program Room. Registration is required; please call 238-4779 x2 to sign up.  The book list, with dates (all Wednesdays), follows.

October 17 FOOD AND THE ENVIRONMENT Readings: Berry, Wendell. Bringing it to the Table: On Farming and Food Fisher, MFK, and Apple, R.J. Selected Essays