Over the past winter Westchester County and Putnam County finished construction on two of the three remaining gaps in the South County-North County -Putnam County Rail Trails located on the old Putnam Line Rail bed. The first new section in Yonkers, from Dunwoodie Park to Tuckahoe Road is approximately 1.75 miles long and eliminated a dangerous descent on Mile Square Road to Tuckahoe Road.  The new section meanders through Parkland and travels under Tuckahoe Road, which is far safer than crossing a dangerous intersection. See the map below.

The second new section in Putnam County connects Tilly Foster in Putnam County to its new terminus on route 6, only one mile from the Brewster train station.  The new section avoids the heavily traveled sections of Route 6 and contains a beautiful section that crosses the reservoir. The entire Putnam section, which is 11 miles long and parallels Route 6, has many breathtaking portions that cross watershed land.

Brewster to the NYC Subway: 47.2 miles

The Elmsford section, which ends at Warehouse Lane and requires traveling on either 9A (dangerous) or the commercial area to its west on Nepperhan Avenue (watch for glass and nails!!) to Route 119 where the main section of the South County trail starts adjacent to Pete’s Tavern. The Elmsford detour may not be replaced with a bike trail for years because the County transferred ownership of the Rail bed to the SPCA and because a boardwalk will have to be built along and over the Saw Mill River for 200 yards or so under Route 287. We had been told that the bike trail would be built when the new Route 9A bypass was built in Greenburgh to relieve traffic on Route 9A, but such major new construction projects do not seem achievable for the forseeable future. So take Nepperhan and be careful for a few more years. It’s worth it to bike the South County Trailway!

Now, everybody wants the bike path!

Ironically, the construction of the new Yonkers section of the bike path was blocked for many years by its neighbors, who were fearful of crime and didn’t want their personal use of a portion of the trail bed as their backyards disturbed!!  Luckily a change in the County Board allowed the work to be done.

When I first proposed the Millwood portion of the bike path in 1989 and the Yorktown section in 1993 I heard the same arguments from residents of Millwood and later in Yorktown when we extended the path to Yorktown Heights!  People thought it would diminish their property values rather than increase values by providing such an amenity.  It’s great to see that public opinion of the bike path has changed and is now viewed as an economic engine. And it cheers me to see so many people using the path all year round!

Mark Tulis is a former New Castle Town Supervisor and Westchester County Legislator and is an attorney and Chairman of the Board of The Westchester Medical Center.  He is an avid bicyclist and rides the bike path every day all year round. 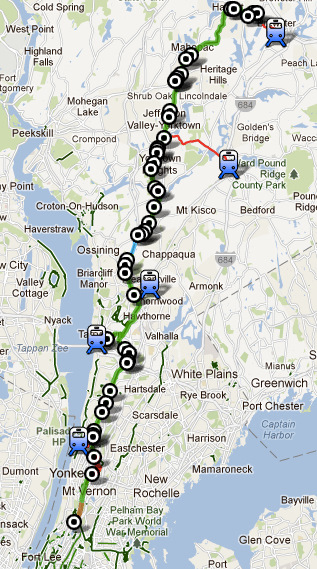 Tweet
Comments(4):
We encourage civil, civic discourse. All comments are reviewed before publication to assure that this standard is met.

Mark, thanks for all your work in getting this done.

Mark, Don’t care what the bargaining unit leaders say about you, you the man for making this happen in your free time!

I’ve done the ride into the city on the bike path – it’s a great trip.  The addition at Tuckahoe Rd is a great addition to the system.  I look forward to trying it soon.  Riders should note – you can continue south at the end of Van Cortlandt Park on a marked bike lane on Broadway into Manhattan – a few turns in Inwood and eventually you get to the bike path on the West Side Highway.  You can take this down to the W90’s and take a designated bike lane on street into Central Park….continue on to 5th Av – and then an interesting ‘finish’ down to Grand Central.  From there Metro North allows 2 bikes per train for the ride back to Chappaqua (non-rush hour).  Be sure to sign up for a Bike Permit at Grand Central beforehand.

For those brave enough to defend themselves against bikers going 45 MPH, it’s also a great a walking path.