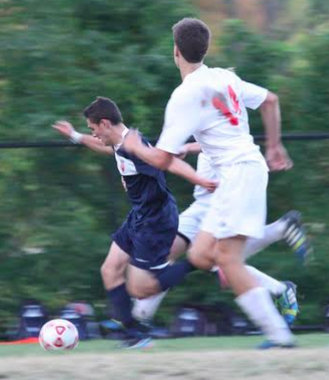 The Horace Greeley Boys Varsity Soccer team wrapped up its regular season in fine fashion this past week. On Wednesday, October 8th the team visited RC Ketcham and pulled out a thrilling 4-3 victory over the 9th ranked team in Class AA. Greeley twice battled back from 1 goal deficits to eventually win the game. Forward Matt Neuberger scored a hat trick in the game and sophomore Jonathan Gerstein scored his first varsity goal. After trailing 2-1 in the first half, three consecutive goals by Greeley sealed up the victory.

On Friday, October 10 Greeley played Rye at home in a tough defensive struggle. Greeley controlled the bulk of the play from the back line up but could not find an answer for the tough Rye goalie. Mid-way through the second half midfielder Michael Adler put in a beautiful pass onto the feet of Zander Levitz who scored the goal of the year on a 20 yard curving shot that skimmed off the far post and into the side netting. The only goal of the game along with great goalkeeping of Jason Re was enough for the 1-0 victory.

On Tuesday, October 14, Greeley traveled to Portchester to meet the #3 ranked team in Class AA and the overall 5th ranked team.  The matchup has always been a strong rival for Greeley and facing the all-sectional junior forward Steve Hernandez of Portchester makes it all the tougher competition. Greeley struck first in the game with a goal from Matt Neuberger, his 13th of the season. Matt has been one of the top scorers in Class AA and deserves mention for all-sectional. He subsequently had to leave the game due to tightness in his hamstring. After a quick Portchester goal and 1-1 tie at half, Portchester came out strong in the second half and scored another to take a 2-1.

Greeley did strike back late in the game to tie the game at 2-2 with a free kick from Woody Grob who has been very versatile this year. After filling in for injured defenseman earlier in the year, Woody has now gotten comfortable in the forward position and secured the goal for Greeley which ended the game in a 2-2 tie.

On Friday October 17th, the team celebrated senior day by entertaining Scarsdale at home. In tough fought battle verse the 8th overall ranked team Greeley fell 2-1. After spotting Scarsdale a 2-0 lead in the first half, Greeley fought back in the second half with a Mike Ballou goal and nearly tied game in the remaining minutes with a point blank blast from Luke Cohen which was deflected wide by a Scarsdale defender at the last second. On Saturday October 18, Somers was defeated by John Jay which awarded Greeley the league title with a 7-2-1 overall record. The team will now spend the next few days preparing for the sectional playoffs.