Keeping an Eye on Developments at the Reader’s Digest Property 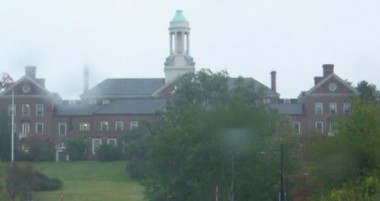 October 12, 2007 by Lee Bowen People continue to ask if I’ve heard anything more about the potential re-development of the former Reader’s Digest site.

My vantage point is a great one:  I live at the corner of Roaring Brook Road and the entrance to Horace Greeley High School. Through this new community newspaper, I’ll attempt to briefly report on Digest developments, giving some background and major facts. This business-zoned campus is the largest in our town and any change in its use will have a huge impact on New Castle. The more we all know about the issues, the better.  New Proposal

This summer Summit Greenfield (S/G), the owners since 2005 of the Reader’s Digest property, submitted a new proposal for its development. They would like to build 278 residential units on the property and be allowed an unlimited number of business tenants in the business space.  In a joint meeting on September 18, 2007, the town board and planning board heard this second proposal.  Its main points are these:

1. A request for a zoning change to remove the present four-tenant limit on the business space.

2. A request for a zoning change to create a Multi-Family Planned District (MFPD) zone made up of 64 acres alongside the business zone for 278 residential units. The units would be configured as follows: four three-story buildings containing 170 units (24 affordable for seniors), four three-story buildings containing 64 units and 44 two-story townhouses (32 units of which would be affordable workforce housing).

3. S/G’s attorneys say they will show that age restrictions for 222 of the units— “one-member-of-household 55+” and “no children under 18”—are indeed enforceable.

4. Two acres of current residential property directly across from the Education Center may be offered to the town for municipal use, such as a pool or police station. Important issues

The town board has declared itself Lead Agency and intends to begin the SEQRA (state environmental impact review) process once again. (On December 12, 2006, the town board declined to continue the SEQRA process for the developer’s first proposal, to build 348 residential units).    Concerns heard from both board members and residents centered around traffic, sewer, age-restrictions and the possible effect on the school population if not enforceable, wetlands, parking, anticipated tax revenue and the maximum number of employees if the commercial space were fully leased.

On September 26, 2007 S/G presented a short version of the proposed zoning change to the zoning board. But the zoning board informed S/G that since the town board has declared itself Lead Agency, the zoning board has no power to grant a variance at this time. Public comments were not allowed and the “informal hearing” was adjourned. Issues for the school board

I also attended S/G’s presentation of its plan at a work session of the school board on Wednesday, October 10, 2007.  The age-restriction issue was discussed in detail, being of special interest to the school board. If not enforceable, 278 new families added to the community at once would have a significant impact on the school budgets due to increased enrollment.

The school board also asked about the potential tax revenue that would be created by this proposal; the number of new students it is projecting will be added to the school district from the 32 units of affordable housing; anticipated traffic difficulties in the high school area; and the necessary zoning changes.

Other sources of information

The League of Women Voters of New Castle featured an article on Summit/Greenfield’s second proposal for the Reader’s Digest site in the Sept/Oct 2007 issue of its newsletter, The Voter.  [Editors’ Note: Click here reprinted with the permission of the League. Go to www.lwvnewcastle.org to learn more about the League.]

Additional information about the status of the Reader’s Digest development proposal can also be found on the Town of New Castle web site: http://www.town.newcastle.ny.us/ReadersDigetProperty.html