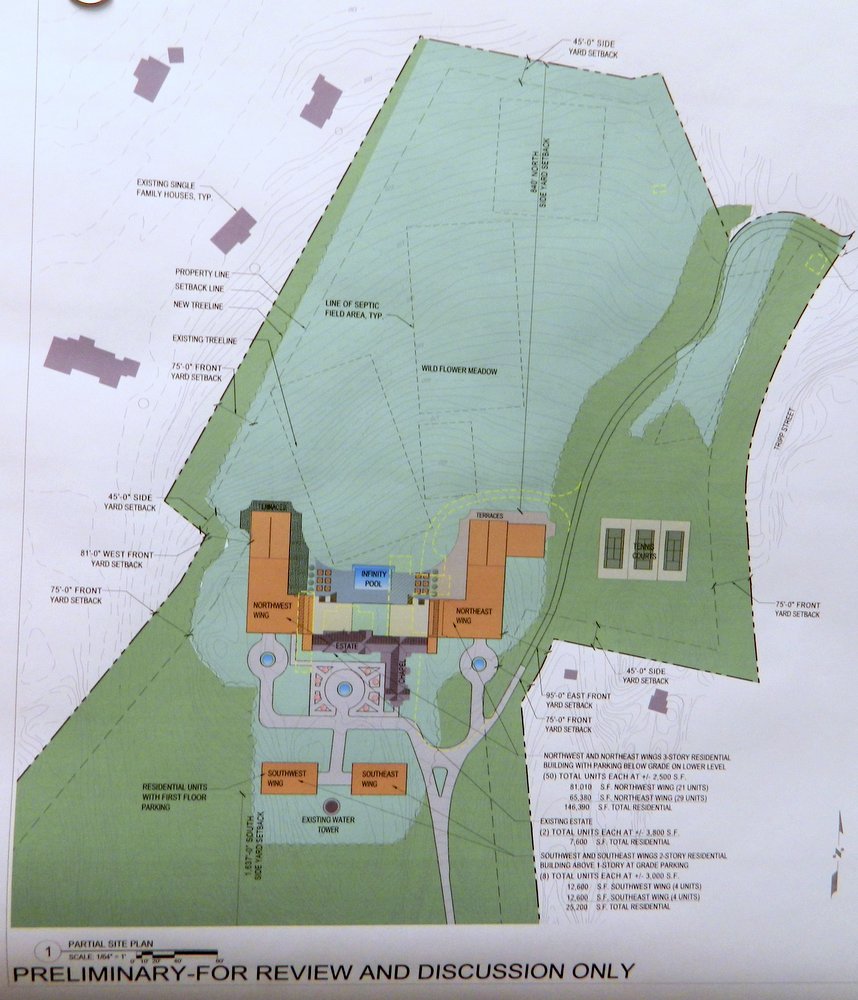 On Monday night Town Board members voted to hold a scoping session on the latest proposal from Stephen Oder of Soder Real Estate Equities for a 60-unit condominium development at 773 Armonk Road, the Legionaries property.  Oder has withdrawn his proposal for a commercial spa, hotel and condos, and will instead concentrate on “adaptive reuse” of the former Billy Rose mansion and estate for residential use.  He is proposing the the Town create a “Unique Property Preservation Floating District” for 60 condos.

Two condo units would be located in the original mansion, 50 in reconstructed wings on each side of it, and eight in two smaller free-standing buildings in front of it.  The units would be two- and three-bedroom condos not age-restricted, but geared to “active adult” living.  The development would include a 75-seat screening room, a fitness center with outdoor and indoor pools, tennis courts and walking trails.

Elimination of the spa and restaurant, Oder pointed out, would drastically reduce the amount of water needed for his project.  His attorney, David Steinmetz, added that Oder’s consulting engineers described “the lift with regard to effluent disposal” as “much lighter.”

Oder would keep 42,000 square feet of existing building space and create an additional 150,000 square feet.  No part of the new construction would be higher than the existing mansion; the new wings would “terrace down” toward the back of the property in order to afford views to the north.

The plan shows tennis courts to the east of the property.  “Would the tennis courts be lit?” asked Town Board member Elise Mottel.

“If lighting is an issue, I’m obviously not going to light it,” said Oder.

“I’m right there,” said Tripp Street resident Sharon Greene, pointing to her house near the courts.

“OK, but I will landscape the dickens out of this,” said Oder, “because that’s my style.”

“I will work on a landscaping plan,” said Oder, “to mitigate any visibility.  We’ll work with neighbors to make it work.  I will meet with neighbors one-on-one, so everyone can look at this development as a pristine development that will add value to the neighborhood.”

Town Board member Jason Chapin asked the Board’s counsel whether the Town had heard back from the Legionaries about the tax exemption for religious use the property currently enjoys.  Nick Ward-Willis responded that the town assessor had sent out a letter but had not heard back yet. The deadline for decisions on exemptions is June 1.

“There’s a 95 percent chance I will buy the land regardless,” said Oder.  “I’ve discussed this with [the Legionaries owners].”

Town Board member Elise Mottel asked what plans Oder had for septic.  “We still studying it,” said Oder, “but with this project the demand for septic is a lot lighter.”

Steinmetz asked Board members directly, “Would you like [Oder] to pursue this?  It’s still a discretionary zoning.  We’re pivoting somewhat and submitting a residential plan.  It would be nice for you to announce the reopening of the scoping session for May 27.”

“You’re presenting a concept,” said Chapin. “We don’t say we agree or disagree, but whether it’s appropriate to move forward with the review.”

“We don’t want t waste your time, my time, or my client’s money,” said Steinmetz. “If you have no desire to pursue this, tell us.”

“This is quite different from your initial proposal,” Chapin pointed out.

“If we did talk and determined that it was in the best interest of the town if we decided that the Planning Board as lead agency would be better,” Town Board member Lisa Katz asked Steinmetz, “would you be amenable?”

“It’s not up to us to say,” said Steinmetz, “but to the extent it requires rezoning we feel it would be appropriate to stay with the Town Board. I know you have a host of other things on your plate.  Steve [Oder] has a deadline of January 15 [in his option with Legionaries to purchase the property].  We need to make progress.  If your Board doesn’t have the time and attention to do it, punt us to the other board, or keep it.”

“I’d like to consider send this to the Planning Board,” said Town Board member Adam Brodsky. “There are some very technical issues.  They have more specific expertise in areas.”

Supervisor Rob Greenstein told Oder and Steinmetz that the Board would discuss scheduling the scoping for May 27 at its May 12 meeting.  On May 12, the Board decided to hold the May 27 scoping session and to remain lead agency for the application.