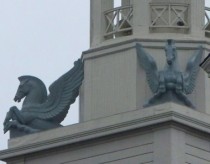 My dad had an abiding faith in the common sense of the American judiciary.  In approaching legal research, he once said to me:  “If it feels wrong, there’s probably a case that says it’s wrong.”

Like others, I too was taken aback when I read Town Attorney Clinton Smith’s remarks at the Town Board meeting on August 10, 2010, suggesting that there might be a significant constitutional impediment to New Castle’s enforcement of existing zoning law at the Reader’s Digest property because a person’s right to do “what he will” with his property cannot be “arbitrarily withheld.”  (See “Town board’s counsel explains town’s obligations and developer’s rights to board of ed members,” NewCastleNOW.org, August 13, 2010.)

That felt wrong to me.  My wife Olga agreed.

So we hopped on my Lexis account and spent forty-five minutes entering some common sense word searches, the result of which seemed to confirm my dad’s advice.

In Matter of Overhill Bldg. Co. v. Delany, 28 N.Y.2d 449 (1971), New York’s highest court stated that, once a “legitimate purpose” for a zoning restriction is established, enforcement of the restriction will be deemed “arbitrary” only if it “deprives the property owner of any use of the property to which it is reasonably adapted….”  In Overhill, the purpose sought to be achieved by continued enforcement of the zoning restriction was public safety in the form of alleviated traffic congestion.  In the court’s view:  “That this is a legitimate purpose for a zoning ordinance is a matter which is beyond question.”

Now for the “gee whiz” part.

Shucks, I’m just a labor and immigration attorney.  I could be way off base.  Indeed, life frequently confirms the truth of the adage that “a little bit of knowledge is a dangerous thing.”  I concede, without hesitation, that there could be subtle issues here that are only readily discernible to the seasoned real estate litigator.

But, if we are wrong – we who believe that a real estate developer’s self-created hardship cannot conceivably be the basis for subverting zoning restrictions that serve a manifestly legitimate purpose – then it must be explained to us in detail.

A passing reference to general Fifth Amendment principles will not suffice.

Otherwise, there is every appearance that we are merely subordinating our law to the economic interests of a developer – a result to be resisted as a matter of interest and principle.

Lee Seham ____________ To see NCNOW.org’s collected articles and letters to the editor on the subject of Reader’s Digest-Chappaqua Crossing, click HERE.

Tweet
Comments(6):
We encourage civil, civic discourse. All comments are reviewed before publication to assure that this standard is met.

Mr. Seeham’s point is nicely stated and supported.  Every Town Board, Planning Board, and Zoning Board member should certainly read this letter to the editor as well.

Certainly “when a buyer purchases property that is already subject to zoning requirements, any hardship from the zoning is considered to be self-created.”

And enormous harm to the Town and Town residents would be “self-created” by the Town Board if they adopt the zoning changes requested by Chappaqua Crossing.

Lee, great analysis (but what do I know, I’m just a personal injury attorney??).  I would encourage any resident who agrees with you to sign the “Fight To Stop Rezoning at Chappaqqua Crossing”. Here’s a link:

I have become a fan of Mr. Seham due to his old fashioned stop and think what is best for the general population. Thank you again, Mr. Seham. If there is any place that there is a technical error, let common sense prevail. I know that laws are technical, but the common good of protecting our schools integrity should supercede corporate gain!

As Mr. Seeham sets out, “when a buyer purchases property that is already subject to zoning requirements, any hardship from the zoning is considered to be self-created.”  And “the courts “should not be placed in the position of having to guarantee the investments of careless land buyers.”

The town’s attorney’s misguided and ill-informed explanation perpetuates fear, uncertainty and doom by and from the town board.  The buyer knew they were buying restricted property.  Their proposals require a zoning change.  Without changes, the developer may lose money.  With changes, Chappaqua would lose so much more.  The economy has not been kind to anyone – including real estate developers.  The cost to support the new students will not be covered by the taxes levied. Student-to-teacher ratios will increase (and a higher students-to-teacher ratio does not equal better quality of education).  The quality of our schools IS a primary draw and supports higher home prices (empty nesters note—if the quality of schools falls so will the value of homes you might be placing on the market).  Traffic congestion will increase (Reader’s Digest traffic is insane at times—the increase from dense housing will not be offset by a turning lane….).

Crazy idea—build single family homes on 1 acre lots. And a few below market homes as well.  Seems they can build quite a few homes there.  Make a separate entrance, put up a buffer of trees etc, give a ballfield as thanks for allowing single family homes.  Taxes will be as single family homes – character of Chappaqua will endure, the developer may make money,  tho not as much as they had hoped. Just saying…..

Mr. Seham eloquently expresses (and supports) what was obvious to the entire town – that we are not responsible for “bailing out” Summit-Greenfield from their unsuccessful investment.

What a shame that the attorney we pay to represent our town’s interests seemed predisposed to argue to the contrary.

I read with great interest Lee Seham’s 09.13.10 Letter to the Editor. I am not a lawyer (recovering or otherwise), but he makes it patently clear that granting Summit -Greenfield a residential-zoning variance is tantamount to compensating it for a self-created hardship. The Town of New Castle should not bend its zoning to help the developer recover economically from poor business decisions with respect to the Reader’s Digest property, nor is it obligated to under some wacky misinterpretation of the Fifth Amendment. We all have investments that have underperformed. The developer should concentrate on filling the commercial space it has, and accept that its return-on-investment may be less in the new economy than the old. The Town should undertake analysis to determine if it is in the best interest of the community to allow the developer more commercial tenants since the largest, Reader’s Digest, is forever out of the picture.