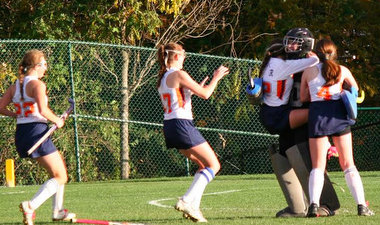 Few leaves remain on the trees, the weather is cold, and the fall sports season in Chappaqua is over, sadly.  Wait, what did you just say?  It’s not over??  How can that be?  Soccer, tennis, curling, football are finished for the year, right?

But the Greeley Quaker Girls’ field hockey team marches on!  After finishing the regular season 13-3 and gaining a bye in the first round, the Quakers beat Scarsdale in the second round on Thursday, October 30th, 2-1 in a hard-fought, intense game.

The game was evenly matched with both teams having numerous scoring opportunities early on, but at the 10 minute mark, Olivia Green sent a big hit way up the right sideline that was deflected beautifully by Megan Graham right onto the stick of Katie Jakacki.  KJax, as the team calls her, carried in and beat the Scarsdale goalkeeper to give Greeley an early 1-0 lead.  You will not see a prettier assist and goal.  Graham is like a Kestrel……………..look it up!!  OK, I will tell you, she has the Kestrel’s gift of accuracy of movement, speed and grace, mental concentration, acting at the correct moment with patience and precise action.  Like a Pronghorn, Jakacki is constantly moving for the entire 60 minutes and always seems to find herself in the right place at the right time.

The referees penalized Greeley twice in the first half, two minutes each, but Greeley’s defense held up to the task, stopping all of Scarsdale’s opportunities.  Olivia Harris made save after wild save, and the defense stepped up.  Lindsay Hauptman stopped one early opportunity positioned in the goal and cleared out a ball that Harris had saved leading to a rebound shot.  Hauptman went on to stop Scarsdale rush after rush, taking risks and winning the entire game.  Coaches have described Hauptman as a Koala, not because it is the laziest animal in the entire world but because it is smart, cagy, tenacious and will bite your head off if you get it mad!!

Hannah Sofer had to deal with numerous mano a mano situations and stood strong in each, frantically covering the middle with grace and joie de vivre.  Coach Brittany Paulis commented, without Hannah, we would be in deep tribulation.

Paulis and head coach Sukhi Singh have done a miraculous job with this team and the entire Greeley Field Hockey program, it is a top sport in the community and will be for years to come.

Annie Lindenthal at stopper amazingly covers a huge portion of the field and is always there to transition the ball back to offense when Scarsdale thought they had some momentum, a constant source of agitation for opponents.  Lucy Benack, with speed and timing is the offensive defensewoman threat for Greeley, turning each Scarsdale rush into a Greeley rush time after time.  Her timing is prodigious.  Like a Peregrine Falcon, Benack is faster than others of her breed an unable to be caught.

At midfield Olivia Green was stellar, fighting for and winning the majority of the 50-50 balls and carrying the play for the Quakers as she did the entire season, covering the field with skill and determination. Olivia moves like a shark, always ready to capitalize.

Early in the second half Greeley doubled the lead on a corner as Sammy Attia took a terrific pass from Nikki Potter to beat the Scarsdale net minder.  Attia wommanned the left side winning possession and beating defenders the entire game.  Back to Potter, the freshman was outstanding, all over the place and constantly frustrating Scarsdale.

Bernie Grant was crazy good the entire game, tirelessly beating Scarsdale to the ball and her hits were extremely effective, changing the landscape of the game throughout.  One of the team leaders and motivational quarterbacks with internal skill you can’t teach.  Kudos to Bernie and Olivia Green for taking 99% of the big hits this year which is a responsibility they take on with great rapture (hey, give me a break, some of them are juniors and the SAT is coming up!!)

Mid-way through the second half Olivia Harris was called for suppression (the term in field hockey used for covering the ball).  Unfortunately for her, the ref was not in position to see that the ball was not covered but influenced by Scarsdale, made the call anyway.  This led to a penalty shot which was scored by Erin Nicholas, Scarsdale’s leading scorer who had 18 goals this season.

Late in the second half the referees called Potter for obstruction and sent her off for two minutes, which was the 4th time Greeley was sent off for two minutes in the game versus Scarsdale having no penalty time.  Add that to awarding a penalty shot for Scarsdale and……….well, things that make you go “Hmmmmmmmmmmmmmm”.

The last two minutes were crazy but Greeley held off a mad rush including a breakaway for Scarsdale superstar Erin Nicholas who was stopped when Olivia Harris left her crease venturing out to cut off Nicholas and stop the shot 10 yards from the goal, the Greeley defense recovered to clear the ball and a minute later it was all over.

Ready and waiting in case Greeley needed the help were the most patient girls on the team Emily Kerstein, Courtney Kay, Abby Fuirst, Lauren Neff, Katie Graham, Fiona Grant and backup keeper Willa Kuhn.  Ellie Mercer who was injured early in the season was on the sidelines to support her mates!!

The next game for the Quakers will be Tuesday, November 4 at Mahopac in the Sectional Semi-finals.  When asked how they plan to prepare for the next game, Olivia Green commented: “we will have our typical pre-game meal of dunkin munchkins, followed by a daylong of gummies and cookies.  Lindsay Hauptman commented, “we are so happy our coaches allow us to practice as much as they do!  I can’t get enough running and feel we need to spend even more time on the running and practicing this week than we ever have!”

Coach Singh, hearing Hauptman’s comments, is happy to accommodate and responded: “we will run double this week!!”

On a positive note for Scarsdale, one student from Greeley noted, the cars in the parking lot are really nice, must be very expensive!!