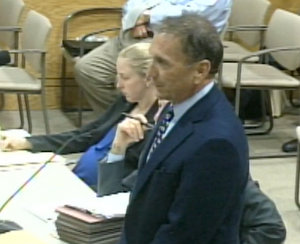 With its public hearing closed and the 90-day shot-clock for the Homeland/Verizon cell tower application due to run out in early August, on July 1 the Planning Board received a surprise offer from a Whippoorwill road resident.  Hopeful that the Planning Board could treat his offer as “new information” and reopen the alternative-site phase of the application process, Bill Wachtel told Board members he was willing to have the Twin Oaks site he purchased six months ago be considered as an alternative to the Alfredo property on the Armonk Road.

Twin Oaks’ higher elevation, he said, might result in better wireless coverage, a shorter tower and less visual impact that the Alfredo’s site.

Wachtel made it clear to Board members that he had “no dog in this fight. I have no financial interest.  I’m simply trying to be a good neighbor—to Mr. Alfredo as well, who may ultimately realize that this is a better solution.”  (The Zoning Board, in its role in the cell tower application process, has taken a hard look at the special use permit provisions granted Alfredo’s Landscaping & Development Corp. to operate a nursery in an otherwise two-acre residential zone, finally approving an amendment that would permit the siting of the cell tower.  See NCNOW’s archived articles on the cell tower application by clicking HERE.)

But the Planning Board believed Wachtel’s offer had come too late.  The shot-clock had started running once the Planning Board judged the application complete two months earlier.  As Les Steinman, counsel to the Planning Board, explained, “A fairly comprehensive review of alternatives was conducted,” he explained, “and federal law imposes time restrictions.  A federal court would say this is a last-moment issue.”

“As the owner of the Twin Oaks property,” said Wachtel, “I’m trying to serve the interests of the community.  If the Board thinks that it’s a more suitable site, we would consider [making it available], consistent with our desire to serve the public.”  Wachtel paid around $2 million for the property six months ago for a grander public purpose—to make it over into recreational space for the town and school district.

Planning Board members made it clear that they felt the time for considering alternatives had passed.  Under the Telecommunications Act of 1996, Steinman explained, to miss the early-August deadline would run the risk of Homeland “going to federal court and having its application granted [as-is] without any conditions or considerations the Planning Board might otherwise be able to impose.” In fact, since the application was filed in October 2013, the Planning Board has persistently pressed Homeland on exactly how big a gap the cell tower needs to fill, and whether a tower of less than 150 feet might do the job.  In a meeting next Tuesday, July 15, a radio frequency expert engaged by the Planning Board will furnish the Board with an analysis of both issues.

Late as it is, continued Steinman, “[t]hat doesn’t mean that the owner [of a property, in this case Wachtel] and the applicant can’t discuss this even now, before we make a decision.  Or even after we make a decision.  And if they both agree that there’s something they’d like to explore and have the Planning Board explore….  But the Board would have to evaluate [the Twin Oaks site] by the same criteria it has used to analyze this current application.  And right now the Board has nothing on this [site’s suitability] at all.”

“So there’s no duty on the part of the Planning Board to assure itself they all the alternatives have been considered?” asked Wachtel.

“We did that,” said Planning Board member Richard Brownell.

“Well, no one called me,” said Wachtel.

“This was a public proceeding,” said Steinman.

Wachtel tried again.  “There’s no duty on the part of the Board,” he asked, “to make inquiry to ensure that the applicant as adequately represented to the Board that in fact all suitable alternatives have been considered?”

“I think Mr. Brownell has indicated that there is a duty, and that the Planning Board has undertaken that,” said Steinman.

“It was looked at,” confirmed Planning Board Chairman Bob Kirkwood.  “Nonetheless the fact is that we’re at this very late stage in this process.  The public hearing is closed and we have 31 days left to reach some sort of decision on this application.  If the applicant is willing to listen and wants to entertain this, that’s fine by us.  But we would need some sort of statement from the applicant to hold this [process] in abeyance so we’re not up against the shot clock.”

“We encourage you to speak to the applicant,” added Brownell, “and [if both parties agree to] change the timeline, we’re happy to do that. We’re always happy to get to a better solution if possible, but we always have to balance the needs and rights of the applicant, the homeowners and the community—all three things.”

By phone this week NCNOW reached Andrew Campanelli, an attorney who has spoken before the Planning Board on behalf of residents of Whipporwill Lake Road.  “Cell tower developers do not have carte blanche to place cell towers anywhere they want,” he said.  “The interest of the community must be protected by local Planning Boards.  They are, in fact, the only line of defense against the irresponsible placement of towers and, as such, are obligated to tell Homeland Towers if they believe there is a superior location, late as it is.  The mere fact that the shot-clock is running doesn’t change the equation or eliminate the Board’s obligation to act in the best interest of the community.”

Video of July 1, 2014 Planning Board meeting

The Homeland/Verizon cell tower is the first item on the agenda.  Wachtel makes his appearance at the 7-minute, 55-second mark and his discussion with PB members runs for about ten minutes.

Related:  NYS’s legal advice to towns on how to deal with cell phone tower applications, from NYS Department of State, Office of General Counsel

Tweet
Comments(5):
We encourage civil, civic discourse. All comments are reviewed before publication to assure that this standard is met.

Planning Board- What exactly did the applicant say about the twin oaks property- was it accurate when they said it?  Did they ask the current owner or just brush it off by saying they had talked to the prior owner. Wachtel owned the property way before the Planning Board decided the record was complete- which by the way doesn’t seem to really have been accurate since you have been collecting more information since then. Just because you only have 30 days doesn’t mean you have to throw in the towel- so maybe you have to review this more quickly- or tell the applicant to review it more quickly.  The applicant can ask for extra time if it can’t complete the review quickly enough.

Dear Planning Board:  The Twin Oaks proposal solves so many of the problems that exist with the current proposal at Alfredo LDC. There must be some way to consider it. It’s a real shame that this local landowner was not contacted properly earlier. As one of the few other large parcels in the area, it is an OBVIOUS alternate location choice for a cell tower in the area. The Twin Oaks property is not only already ELEVATED (for better tower coverage), but it is also HIDDEN from sight. The tower can go up there, and nobody will notice. However – the applicant’s location on Armonk road is in PLAIN SIGHT, on a MAIN ROAD and has a SUBSTANTIAL IMPACT on neighbors. There must be some way to reasonably consider this alternate location. The tower company still gets their tower, and it will substantially reduce the impact on the community. It solves the problem! ISN’T THAT WORTH FIGHTING FOR?

Did Homeland tell the truth about contacting the owner of the Twin oaks property?  Or did they just claim they did because they contacted the prior owners?  If the claimed they had contacted the owners after Mr. Wachtel bought it, then what they said was either a mistake or a lie.  Either way- why can’t the Planning Board make them go back and do it now?  If there are material inaccuracies in their application, isn’t that grounds to make them go back and do it correctly= and if its the shock clock thats the problem, isn’t a substantial inaccuracy in the application a basis on which to deny the application unless they want to waive it to investigate what they should have investigated to begin with?  The Twin Oaks site would give them good coverage on the owest side of the ridge as well as on Rt 128, and would be better and would obviate the need for another tower over there- isn’t that part of the town’s criteria for approval- to place trowers where they can cover a larger area and avoid duplication?

The fix is in.

How many times did Christine ask about the shot clock ?  She never got an answer and then bingo !  times up.