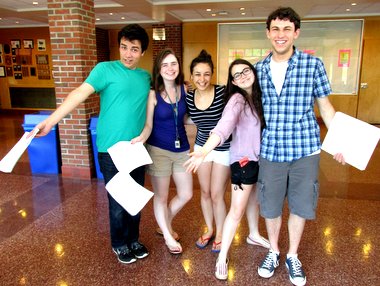 A girl and guy are mentored by their friends on how to text the opposite sex • A man decides that his old family sucks, and so he sets out to find a new one. But, is his new life any better? It is fast and it is funny •  A dysfunctional family comes together to convince the father of the family to cut off his disgusting new ponytail • A family’s dead dog comes back to life as a human •  A typical scene in a high school cafeteria and a not so typical scene in a high school cafeteria . . .

Watch the students of “playwriting & directing” put theories into practice with the development of their written and produced plays. The students have chosen a cast, rehearsed, and will stage a 10 – 30 minute play to be performed for the public. ADMISSION IS FREE.  See several plays on any of four nights—Monday, June 9 through Thursday, June 12—starting at 7:00 p.m.

Synopsis:  A “funny” yet “thought-provoking” play about religion, pop-tarts, and the human mind.

The Malady of Death

Synopsis: A short FILM examining the relationship between two brothers; one a senior getting ready for the rest of his life and the other a fifth grader who is not ready for any kind of change. Cast will need to be available for filming after school, filming will be time consuming.

Synopsis: BFF is about two friends, one used to be popular, the other was NOT. Now that said “loser” is engaged and bringing her fiancé to meet her best friend for the first time, the popular friend can’t handle it. She gets drunk as heck and tries to seduce the fiancé because if she isn’t engaged yet, dorky mcdorkster sure can’t!

Synopsis: Set in an upscale Italian restaurant on a Friday night, Casa D’Angelo follows three concurrent disasters slowly unfolding through the evening: A young woman, Florence, finds that the man who invited her out had asked her on a double date, bringing another woman and leaving her dateless, while, one table over, a man named James struggles to impress his uninterested and unfaithful wife on the night of their sixth anniversary, and, all the while, he is under attack by members of the restaurant’s staff, who seem to have him confused with someone else. A very funny and very strange play, it takes a look at the ways that people try and fail to communicate with one another.

Synopsis: This play follows a writer’s work on a play. It goes through the writing process and deals with some of the issues a writer comes across while writing. While that is going on, two actors will play the characters in the play being written on stage and will provide a visual for the audience of what the writer is creating. A little confusing, I know. Think of it like a play within a play. Should be fun.

Of Mutts and Men

Synopsis: A family’s dead dog comes back to life as a human.

Synopsis: A man decides that his old family sucks, and so he sets out to find a new one. But, is his new life any better? It is fast and it is funny.

Please Cut That Off

Synopsis: A dysfunctional family comes together to convince the father of the family to cut off his disgusting new ponytail.

Synopsis: A girl and guy are mentored by their friends on how to text the opposite sex

Synopsis:  Alexander and Annabella are out on a date.  “Alex” wants to take things slow, while “Zander” wants to speed things up.  “Anna” is a little shy, while “Bella” is flirtatious and ready to dive in headfirst into her man’s arms… and maybe even a little farther.  A cute and witty romantic comedy about trying to find the balance of the physical and romantic parts in a relationship.

. . . as well as pieces by the Theatre Repertory Company and Walter Pearce.