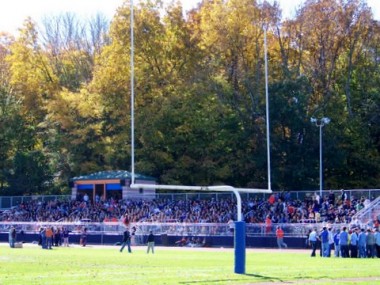 Homecoming in the United States has a long tradition of being a community-wide weekend event where former residents and alumni are welcomed back around a central event that is usually a sporting contest, most commonly a football game.

There are usually pep rallies, picnics, parades, tailgate parties and a dance.

The years have been unkind to traditions at Greeley and the homecoming festivities fell short this year as the traditional evening bonfire was scrapped and the accompanying pep rally was held at 1:30 p.m. on Friday afternoon without cheerleaders. The Saturday parade that formerly sported festooned floats has devolved into a procession of decorated convertible cars carrying cheerleaders onto the competition field.

Alums who returned to town had little to attend outside of the games played by the football and soccer teams, as the Homecoming Dance was only for current students. How welcome could they feel, abandoned after the briefest of welcomes?

Community involvement was limited to the recreation football teams being announced at half time and the parade of cars that circled the field before kickoff. There was wistful disappointment voiced by some long time followers of Greeley sports that more wasn’t done.

This column is not written to complain, but to challenge us to do more in the future. The residents, students, administration and town board have to do a better job of coordinating the event. The school board, principals and the entire district must get involved for the scope of this activity transcends the purview of the sports department.

The Horace Greeley High School Sports Boosters are doing as much as they can, but they have been limited by many factors, mostly manpower and membership. Joining the Booster Club is an excellent way to start to get involved, but they need more than your membership dues.  It is important to give your time and expertise.

The town board and local businesses need to throw their weight behind this event that has the potential to bring in revenue and positive energy to New Castle. When engaging in master planning and trying to find ways to draw interest to the downtown, why pass up an opportunity that that is right there?  Community Day and Homecoming could coincide, or one could promote the other. . The Homecoming at Greeley should be a grand and chock-full-of-fun excursion down memory lane with a bright-eyed look at the present for returning alums and long-time residents.  It should have events that everyone can attend and involve the entire community.  I would suggest the formation of a committee that would start the planning and coordination of Homecoming 2009, a committee that I guess I am on as of today.

The challenge is to work together, using our collective imagination, energy and commitment coupled with the desire to make Homecoming a community-building and fun event.  Our community will be a better place and we will better for the effort making the event all that it should be year after year.

Speaking of memories, the Class of 1958 was here last week for a reunion. A few of the former players were on the sidelines when Greeley met the Lakeland Hornets. The players included star quarterback Carl Jaeger and cheerleader Carolyn Metcalfe Mollenkopf, who were introduced by the public address announcer before the game began.