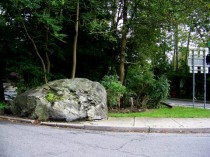 Alas, our “big rock” will soon be gone, and so many memories with it.

I belonged to the Garden Club then, and back in those days, to stay in the Garden Club, you had to rack up points (I called them Brownie points.) We all had to take part in a project to beautify our village. Being the maverick that people thought me to be, I decided that no one was going to catch me bending over at the flag pole planting and weeding flowers. Oh no, I had to be different!

I decided that my “project” would be mowing the grass around the big rock. You see, when one turned onto Hunts Place from Quaker, everyone saw the big rock, surrounded by a patch of unkempt weeds, hardly a pleasing sight. I decided how nice it would be if, as my drivers returned to the bus yard, they saw a little patch of green, neat and orderly, to help them regain their sanity after dropping their bus loads of rambunctious kids.

So, every Saturday morning, down Pines Lane I would roll along with my trusty little lawn mower, to build up my “points.” Actually, it was quite a bit of fun! It became my social hour. It was back in the early 70’s when everybody in town knew everybody. Hardly a car went by, or turned at the big rock, without the driver stopping to say a word or two. I really looked forward to mowing days. I got some girl scouts to plant some daffodil bulbs in front of the big rock.

Then I got the bright idea of writing a letter to the Recreation Department asking if they would consider putting a park bench there, which they did. Shortly after that, the Recreation Department informed me that because they had put the bench there, they would take over the upkeep of the ground around the big rock. It broke my heart! They were cutting off my relationship with the big rock!

Well, here it is 30 years later. The daffodils are gone, and now so is the bench. I thought I had adjusted, but I realize that the big rock is still a part of my life. It has been like a beacon, a way to give directions to the bus company. “Just turn at the big rock,” I would tell everyone. One surely couldn’t miss it. Wish I could scoop up my old friend and save it from its fate, but I can’t, so I sadly write:

My dear Big Rock, my giant, my friend, All good things must come to an end. Time has marched on, and we all know As much as it hurts, we’ll all have to go. Sooner not later, you’ll no longer be. In memories though, you I’ll still see. 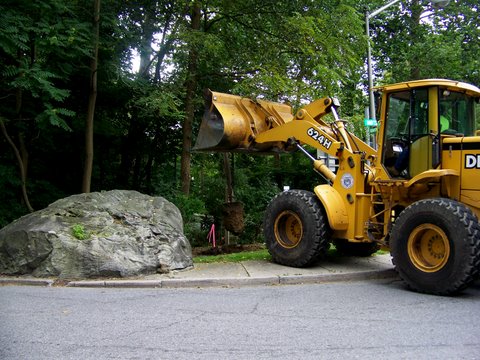 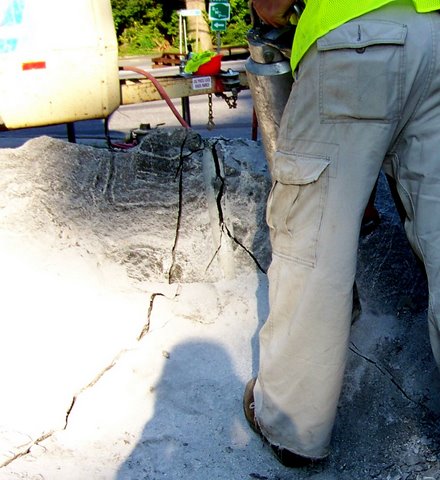 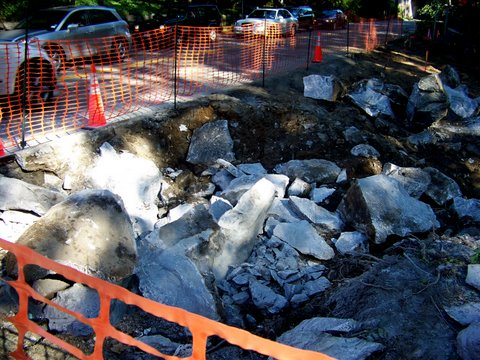