Op-ed: Stuck on the bridge; a plea for better communication 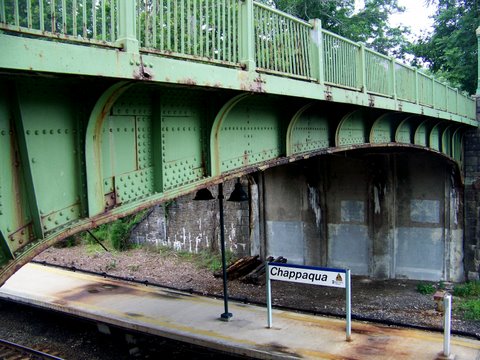 If all goes according to current plans, sometime soon you will drive across our historic Quaker St. Bridge and notice that the canopy of trees lining the gateway to our hamlet being marked for removal. Over the next few weeks you’ll then witness the gathering of cranes, bull dozers and back hoes as construction of a 265-foot-long great wall and new road commence where the trees and a grassy hill once stood.

As construction continues over the next two years, the scale of this $18 million project will gradually take shape. The existing bridge will be demolished one lane at a time, discarded and replaced with a structure that is fifty percent wider. The light railing that was cleverly designed to allow pedestrians and drivers a view of the hamlet as they cross the bridge will be replaced with stone walls mounted with fencing. Two lanes will be expanded into three with the new lane extending all the way to the Greeley Avenue. Like the town board, we hope the additional lane will help traffic and not hinder pedestrian safety. But there are no traffic studies to make sure.

Over the next two years we may grow weary of “frequent temporary lane closures,” as a department of transportation official wrote “it is difficult to work at this location without them.” Maybe merchants will notice a decline in sales as residents shop or dine elsewhere to avoid the construction site or maybe we will feel that a little part of our small town charm was lost. But at some point, it would be understandable if you heard someone ask—but I thought they were just going to repair the bridge? What meeting or announcement did I miss?”

The truth would be that you did not miss anything. Town officials will contend that you could have attended the town board meeting last June where the plan was first presented and approved 10 days later with no community input. Or they could say without regard for their constituents’ busy lives that all board meetings and work sessions are public, broadcast on NCCTV, with minutes posted on the town’s website.

Assuming you had reason to visit town hall, they might point to the incomplete drawings that were on display. Or pressed further, they could provide the running count of each mention of the word “bridge” at town board meetings over the past eight years: all without any correlation to the context of its mention. And when all else fails, they could fall back to the myth that “it’s the department of transportation’s bridge, we had no say, there were no alternatives to discuss, and the current bridge is not safe.”

However, if you were expecting the town board to reach out to the community for input before commencing with one of the largest projects in its history or simply to fulfill its agreement to coordinate a “Public Information Meeting with an open house or presentation format, ….to inform the public of the project and elicit comments on feasible alternatives” (as described in the “Project Coordination” section of the department of transportation Final Design Report, October, 2006) you would have been sadly mistaken.

Although the contract has been awarded, it’s never too late to voice your displeasure to the town board about their poor effort to communicate to residents the full scope of the demolition, replacement and widening of the Quaker St. Bridge. There are several other large and bold initiatives under review in addition to the bridge. Unless you express your concern or elect different board members, there is no assurance that future communication will be any better. Tom Kasulka is a resident of New Castle who has paid close attention to the bridge replacement process and the debate surrounding it.