Open letter to the community: Hello Chappaqua, . . . from one of your loyal merchants 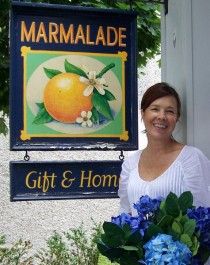 This past weekend an interesting thing happened that I would like to share with all of you.  I own the gift store in town called Marmalade Gift + Home.  We have a sidewalk sign that simply states “Gift Store Open” with an arrow that points in one direction.

It had gone missing for a few days and somehow, last Sunday unbeknownst to us, it got placed on the corner in front of Sotheby’s.  It could be seen if you were sitting at Susan Lawrence enjoying your Sunday coffee and Danish as well as if you were going to or coming from Starbucks.

Well, let me tell you, that day proved to be the most interesting of days. Not only did we end up having a phenomenal day, sales-wise, but also there were at least four or five customers who thanked us profusely for being open.  One man even gave us credit for “saving my life;” apparently he had not realized that his anniversary was that Sunday until that morning . . . oops! The other customers were just so happy to be able to stay close to home as opposed to having to drive all the way to White Plains to The Westchester.  It was that little sign that alerted people to the fact that here at Marmalade we are open on Sunday, as we always have been.

It got me to thinking though: We have advertised that we are open on Sundays on our web site, through our email list and even handed out flyers, but nothing did the job like that little sign.  Then on Monday I got an email from the town saying that someone had complained about our sign and we needed to move it.  So I did.  But, like I said, it has now got me thinking about two things.

First, if everyone was so happy to stay local and not have to drive a half hour south to shop, then shouldn’t more merchants here be open on Sunday?  And second, it’s amazing what the right signage can do.  I really wish that we could all put our heads together to stay within code restrictions, and yet have better exposure for our stores.  If cute little towns like Nantucket can achieve that, I don’t see why all of us in Chappaqua can’t figure out how to do that successfully as well.

If you would, please take a second to post a comment at the end of this letter identifying which of our businesses you’d like to see open on Sundays.

Cindy Lupica is one of Chappaqua’s downtown merchants who is ever interested in making downtown Chappaqua “the” place to be.  Not only does she run the successful gift store, Marmalade, across from Starbuck’s, but she has launched a new venture here in Chappaqua, Studio Marmalade, which is the town’s newest ballet studio for kids ages 3-6.  You can get more info about the new ballet studio at www.mystudiomarmalade.com, and about Marmalade generally at www.mymarmalade.com or her blog www.marmalade-marmalade.blogspot.com.