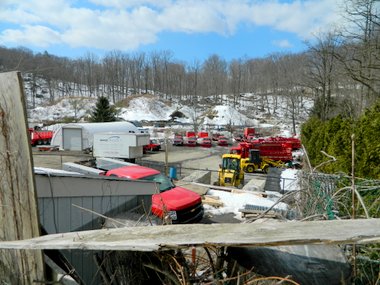 The ZBA questions whether Alfredo LDC has gone beyond the “nursery” of its special permit Monday, March 10, 2014 by Christine Yeres

In its meeting last week the Planning Board set Wednesday, April 16, as a public hearing date for Homeland Towers’ application to plant a 150-foot cell tower at 620 Armonk Road, on the 22-acre Alfredo Landscape & Development Corp. operating as a nursery by special permit in the 2-acre residential area.

Editor’s Note: Videos of the two meetings are below, with time markers for each.

Homeland will show the Planning Board more visual renderings of the tree-style monopole with arms, including a version painted to blend with tree trunks. The Planning Board asked also to see other types of towers, including less powerful—and more expensive—“repeaters” mounted on existing telephone poles.

The town’s zoning laws discourage cell tower placement on residential property, but while municipalities have some power to require that cell tower companies consider alternative locations, federal law limits towns’ authority to decline to host them when a tower supplies coverage for a proven gap.  Robert Gaudioso of Snyder & Snyder LLP in Tarrytown, an attorney representing Homeland, told PB members that there were no better alternative locations, since town-approved non-residential areas had already been occupied by Verizon cell towers. And talks “over many years” with the owners of the Legionaries property on Armonk Road, said Gaudioso, produced no interest on the Legionaries’ part to host the tower.

A resident of the area, Roger Blanc, suggested to Planning Board members that the Alfredo Landscape & Development Corp. could be operating in violation of its special permit, “acting as if they had permission to run a commercial landscape operation—including rock-crushing,”

“The question of whether they come to you with ‘clean hands’ is not irrelevant,” said Blanc. “It is very relevant to your discretion to allow what I think is an unjustifiable use [—the cell tower—] to go forward.”  Blanc characterized the monopole as a “strange Hawaiian tree” more appropriate in places where this type of tower is on display now—at exit 4 of Route 684 and on the Hutchinson River Parkway south of Route 287.

“It’s our understanding there are no violations on the property,” said Gaudioso. “All the buildings have their certificates in place.”

Is the special permit for a nursery “in order”?

One week before, Gaudioso paid a visit to the Zoning Board of Appeals seeking an exemption from the special permit acreage of the roughly 5,400 square feet Homeland needs to mount the tower.

Gaudioso argued that approval of the cell tower was the Planning Board’s province—not the Zoning Board’s— and that the Zoning Board had one narrow matter before it: to approve an amendment to the existing special permit confirming “that the uses on the property as they currently exist would not be impacted by this [cell tower] facility.”

“Right,” said ZBA member Harvey Boneparth.  “We’re not going to be approving the tower, but we will review the special permit for the nursery—and it will be a nursery with a cell tower on it.”

ZBA member Gerry Golub asked whether this property was “the only place” the tower could go.  “We think it’s the least intrusive,” responded Homeland’s attorney.  “There is no non-residential site?” asked Golub.

“We did do an analysis of that and on alternative sites,” said the attorney. “We’re in the process of doing that for the Planning Board.  I can assure you, the Planning Board is going through that with a fine-toothed comb.”

“I agree that we will not be approving the cell tower,” said ZBA member Tony Giardina, “but I agree with the building inspector that the permit needs to be amended so that it could be built—even if it’s never built.  Our job is to keep the special permit use in correct order.”

But ZBA members also recalled that questions had arisen over the years as to whether the Alfredo Landscape & Development Corp. had respected the terms of its special permit to operate “a nursery.”

“My concerns,” said ZBA member Tony Giardina, “is that possible violations are not yet corrected.  I’d like to continue this matter to March and have our Building Department thoroughly research the record to be sure that what was a problem then is not a problem now.”  Giardina asked also for a legal opinion from the Board’s counsel.  “I understand the ‘public utility’ federal law, but I’d like the legal department to research our alternatives under that law.  This may not be the proper place for [the tower] . . . Even under the federal law, what are we allowed to approve or disapprove in certain circumstances?  This may be a law where even though it is a utility this may not be the proper place for it.”

ZBA counsel Ed Phillips noted that approving the exemption of the 5,400 acres from the remainder of the property “would not prevent you from acting on those violations.  What the applicant is asking for is for [your agreement] that there won’t be anything happening on the nursery property itself [with the addition of the cell tower] that will change those nursery uses.”

The Planning Board would be addressing issues of “height and other impacts,” Phillips assured ZBA members.

“But,” said Boneparth, “it’s also important for the neighbors to know that with respect to the nursery, it will be in compliance with the special permit.” The existence of violations is not in itself a deal-breaker for the cell tower application, but it seems to have the ability to put it on hold, presenting an opportunity to check that property owners are abiding by town code, and, in this case, abiding by the terms of the special permit issued by the ZBA to operate a nursery. The cell tower proposed by Homeland for the Rodrigues property on Hoags Cross Road, for example, has been held up because of existing violations to town code that have not yet been corrected.

The ZBA directed Building Inspector Bill Maskiell to go back into the records and see whether there were any violations on the Alfredo property and, if so, whether they were resolved.  The following week, in setting its public hearing date of April 16, 2014 for the Homeland cell tower, the Planning Board allowed that if the ZBA needs additional time to answer that question, the public hearing can be continued beyond April 16. 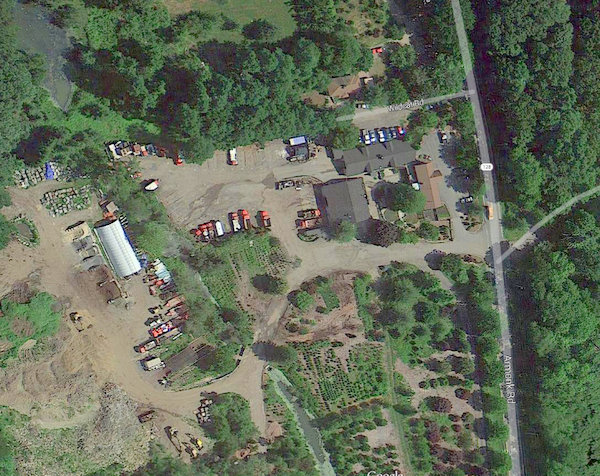 Planning Board meeting of Tuesday, March 4, 2014

The cell tower case begins at the 22-minute mark and ends at the 44-minute mark.

Zoning Board meeting of Wednesday, February 24, 2014

The cell tower case is first on the schedule and ends at the 44-minute mark.

Tweet
Comments(5):
We encourage civil, civic discourse. All comments are reviewed before publication to assure that this standard is met.

Isn’t anything this town does not catastrophic?

This is supposed to be a NURSERY, not an industrial site. Where is our building inspector?

This will stand out like a sore thumb on Armonk Road among the very natural, rural landscape and homes. I pass by there (Alfredos) on my way to Armonk often, and would hate to have to see that every time I drive along that road. I can’t imagine the people who live there will want that in their yards either. I would strongly urge the town against placing an ugly and potentially harmful cell phone tower in this residential area.

Wow between this and the spa proposal what’s next?  I can fit a shopping center in my backyard….maybe I should start looking for developers.

NO CELL TOWER IN MY YARD !

There is so much open space here. So then WHY must an ugly and potentially harmful cell tower be placed right in plain sight in 128 to spoil the charming natural character of the area?! In my yard!!

We pay high taxes to live in a nice area, and then they try to put a cell towers in your yard! Kill my home value (my life savings)!! Put my family at risk!!!