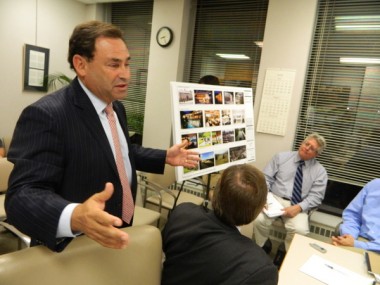 Town Board and Planning Board members gathered to hear the proposal for development of 773 Armonk Road September 7, 2012 by Christine Yeres

Town Board and Planning Board members crowded into the conference room at Town Hall on Tuesday to hear a concept plan for the 97-acre Legionaries of Christ property on the Armonk Road (Route 128).  The plan includes a 30-room boutique hotel “with extensive amenities” in the main and oldest building, a 20,000 square foot spa and gym facility in a nearby chapel. Sixty new condominium apartments—20 penthouses sitting on 40 duplexes, with parking underneath, divided among four I-shaped buildings—would all have an unimpeded panoramic view to the north. 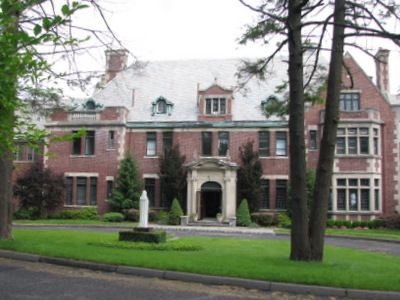 The mansion would be renovated to hold a clubhouse, restaurant, 30-room hotel and six condos

A developer from Montclair, N.J., Stephen Oder of Soder Real Estate Equities and his attorney, David Steinmetz, explained that their visit to the two boards was most preliminary.  “We don’t want to waste a tremendous amount of our time or my client’s money,” said Steinmetz.  “We don’t want to see the town waste a great opportunity.  So we thought coming in here and exploring this conceptually would be great.”

The two realized, they said, that to change the residential two-acre single-family zoning—from the current accepted religious use of the property, now untaxed—to a commercial use would require “legislative action.”  But their plan, they estimated, would bring around $1 million in taxes to the town and Bedford school district, while “preserving a tremendous amount of property in its natural state, much better than any residential subdivision.”

The condo units, a mix of two- and three-bedroom units, would be non-age-restricted, but would be marketed primarily to empty nesters, according to Oder.  “I want to create a lifestyle that people feel they’re paying to be in a place where they love the view.  A lifestyle choice that enhances their well-being in a health-and-wellness type atmosphere.”  Besides 30 hotel rooms, the main building—built in the 1920s, “with great floors, word work and moldings”—would house a clubhouse with a library, rooms to lounge in, a restaurant and six condominium apartments, making a total of 66 condos with the four new buildings to the north.

“What I intend to build,” said Oder, “is for people who are selling their four- or five-bedroom house, the kids are gone and you’re living in your living room and kitchen.  I intend to build a master bedroom like you had in your big house—1,000 square feet—and give them the lifestyle they had in their other house.  No one wants to go from a very large living room to a small one.  If you can give them the same feeling in that limited number of rooms, that’s what the market wants.”

“The septic can handle it,” said Oder. “I’m building the same square footage as 28 [single family] houses,” he said, “but I would have empty nesters.”

“In order to support this project,” Oder explained further, “I need a certain density.  So if you say to me ‘We want you to do 35 units,’ I couldn’t do it.  Obviously, the church wants to get its fair value, and with on site septic there’s a high cost to it.  So unless there’s a certain number of density on the property, probably the numbers don’t work.  I don’t want to have a small number of units at such a price that no one will buy them.”

The view a big selling point 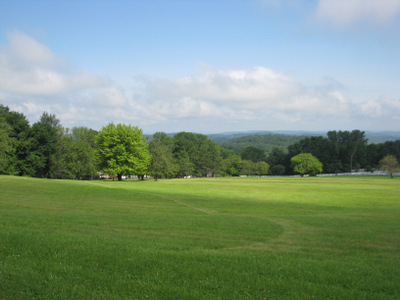 From top of the hill, looking north

“I was blown away by the view,” said Oder, who described the condos as glass-walled on their northern front, with the view a big selling point.

“But you’re putting all your [new condo] buildings up against Tripp Street, a very, very low density residential area,” said Carpenter. “It’s not really looking at what provides some buffer for the Tripp Street corridor.  It’s just giving you your view.”

“We intend to landscape the property with buffer, and enhance that area,” said Oder, who went on to explain that the condo buildings needed to be on the east, along Tripp Street, because “all the septic capability” is to the west.

“Look at the sensitive areas the zoning board has looked at [with previous proposals for development of the property],” Carpenter advised Oder, “and see what you can do to protect some of those areas,” including the Tripp Street corridor.  Several neighboring residents attended the meeting and asked when they would have the opportunity to comment on the proposal.  Carpenter assured them that the plan was in concept stage. 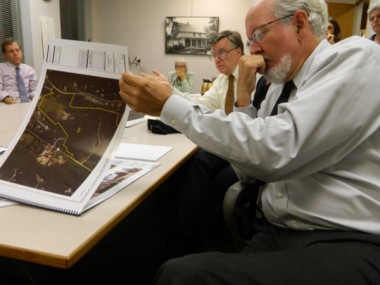 Planning Board and Town Board members hear the proposal.

Oder, more familiar himself with commercial real estate development, plans to partner with a residential developer on the Legionaries proposal and find financial backers.  He had advanced an earlier concept to the Town Board for a 125-room hotel and spa, “but 30-room hotels were more common,” he noted.  These things are difficult to finance.  The banks want to see units I can sell.”  Oder’s purchase of the property from the Legionaries of Christ is contingent upon his procurement of zoning that will permit the proposed development.

Above, a close up of the area of proposed development; below, a map of the entire property.