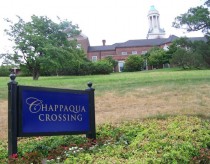 Editor’s Note: The school board’s letter of last Thursday drew 35 comments over the weekend, continuing the discussion of Chappaqua Crossing. Comments follow the text of the board’s letter.

Noting that Summit Greenfield “has cited available physical capacity as justification for their assumptions that the District will not be impacted by this project,” the Chappaqua Central School District’s board of education members issued an explanation yesterday of their misgivings over the latest proposal by the owner and would-be developer of the former Reader’s Digest property.  Board members encouraged residents to attend a joint meeting of the town and school boards at town hall at 7:00 p.m. on Tuesday, August 10, 2010.

In addition, any hopes town and school board members might have had that Summit Greenfield would propose that some or all of the residential units of its newly-unveiled “Modified Project” would be assessed in the manner of single family houses, or fee simple, rather than as condominium units, have been disappointed. In Summit Greenfield’s recently filed final environmental impact statement describing the Modified Project, the developer asserted, “All units are proposed to be held in condominium ownership.”  Condominium units are assessed on a different basis than single-family houses, and owners of condominiums typically pay less in taxes than an owner of a comparably priced house.

At 4:32 p.m. Thursday, July 29, school board members issued the following email through the district’s K12alerts system:

On August 10, the New Castle Town Board (“the Town”) and the Chappaqua Central School District (“CCSD”) Board of Education will be meeting in joint session prior to our regularly scheduled Board of Education meeting that evening.  On the agenda will be a discussion of the proposed development of the former Reader’s Digest property by Summit Greenfield (“SG”).

Prior to our meeting with the Town on August 10, we would wish to make two points clear to the community:

One, the CCSD Board of Education speaks for the District.  While we recognize and appreciate that the Town Board is the lead agency on this application for zoning change, the CCSD taxpayers will be bearing potentially significant financial risk if this application is approved as submitted.  The CCSD Board of Education appreciates the community’s concerns with any increase in our budget during these difficult economic times.  We believe we have an obligation to make known the financial risks of this project and the possible effects on the District’s taxpayer as school taxes account for 65-70% of their property taxes.

Two, the CCSD, as a fiscally responsible organization, continually monitors both present and future enrollment and its effect on both capacity and cost.  SG has cited available physical capacity as justification for their assumptions that the District will not be impacted by this project.  Physical capacity cannot be considered without also considering the cost of changes in student enrollment.  Our primary concern with the proposed development is not where to put additional students.  Rather, it is how to equitably fund their education.

To the extent that the proposed rezoning creates units that are not taxed at a fee simple rate*, the additional expense for educating those children will become the responsibility of current District taxpayers in the form of an increase in taxes or a decrease in services.  Simply put, without the new units being taxed at a fee simple rate, the risk that the tax base does not cover the cost per additional student is borne by the District taxpayer, not the developer and not the Town.  A fee simple tax rate would make those units on par with the other District taxpayers.  As is our obligation, we will educate any and every child who lives in our district.  What we seek for our District’s taxpayers is an equitable way to account for the additional cost.

We encourage all residents who have questions, concerns, or simply wish to comment on the effects of the proposed development on the CCSD to attend the joint work session on August 10, 7:00 p.m. at Town Hall.

Town and school boards put their heads together to prepare for June 23 Chappaqua Crossing hearings June 19, 2010

Board of Education submits its comments on DEIS September 29, 2009

To view all of NCNOW’s coverage of Chappaqua Crossing, click HERE.