Ten years later, Pete Kuczma is back; will supervise JV and Varsity at Greeley 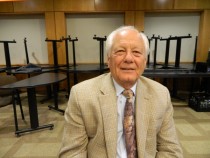 On Tuesday, Board of ed members appointed Pete Kuczma, who retired as athletic director of Greeley in 2002, to the position of “Supervisor of Athletics” at Greeley.  He will work with junior varsity and varsity sports while Athletic Director Steve Young focuses on modified and freshman sports as well as on developing the Annual Professional Performance Review (APPR) assessments for the athletic department.

Reached later in the week, Superintendent Lyn McKay described Kuczma’s position as “a support position in the department of athletics and physical education.” His work day will begin around noon, and his hours will remain flexible, according to need.

The additional position was needed, said McKay, because Young has an increased work load in creating and implementing the local assessments for PE teachers that state-mandated APPRs require.  “We brought back Pete Kuczma,” explained McKay, “so that we can ensure that high school athletics—in particular varsity and JV—are handled by one person, while Steve picks up all the rest.”

According to John Chow, Kuczma will be “an employee with a service contract and no benefits,” as opposed to a tenured administrator.  His salary will be $60,000.  Young will remain as Director of Physical Education and Athletics at a salary of $171,211.

The hiring will have no effect on the Athletic Department budget; the cost of the additional position will be offset by a reduction by half of the secretary to the athletic director.  She will spend the other half of her time at another clerical post in the high school, while another clerical position at the high school will be halved as well, with that person split between duties at Greeley and at Grafflin, where a retirement left an open clerical half-position.

In the last ten years, Kuczma has worked as an interim athletic director at Croton Harmon and, most recently, Putnam Valley schools.