Editor’s Note: William Robins (HGHS ‘10) qualified for the US Senior National team in July 2012 as a member of the Men’s Lightweight Eight and competed in the Rowing World Championships in Plovdiv, Bulgaria that took place August 15-19.  Following is account of how he dived into crew in college.

UPDATE from Robins 8.24.12: “We didn’t perform as well as we hoped. We placed 4th of 5 in our heat, behind Germany, China and Poland. This sent us to the “Repechage” race the following day (literally, “Second Chance”), but when we woke up for the race, our 4-seat had come down with a bad case of food poisoning. We were able to actually use a coach of another boat as a substitute, but the stress of the day had rattled us and we were not able to do well enough in the race to advance to the A Final. We ultimately placed 3rd in a very tight B Final on Saturday (8/18), behind the Netherlands and Hungary. This put as at 9th overall.”

I joined Empire Swimming, a club team, as a Greeley junior in February of 2009. Up till then, I had spent several years swimming in the summer for Chappaqua Swim & Tennis and in the winter for Greeley Swimming and Ace Aquatics. Aided by a brand new full-body LZR, I had some very promising results at my high school sectional championship. I wanted to step up the intensity for the remainder of my high school swimming career, and see what would become of it. It was extremely “late in the game” to make such a dramatic shift. My body had not grown up with such an aggressive level of training, my backstroke and butterfly were utterly bad (problems which never were fully remediated), and all but a few of the people on the team were complete strangers.

What I did have was determination and commitment. For the seventeen months that I was a swimmer on Empire, practice became the anchor of my schedule, as opposed to a daily choice. My attendance from September through January during my senior year of high school was 100%. I developed a solid work ethic in the water and a positive attitude, regardless of how awful a set was or how many times I got lapped. I experienced modest success in all of my events, and great success in a few. The team developed into almost a second family, and I began to thoroughly enjoy the “swimmer” lifestyle. When I joined the team, I doubted that I would swim in college. Within a year, college swimming was my main focus. 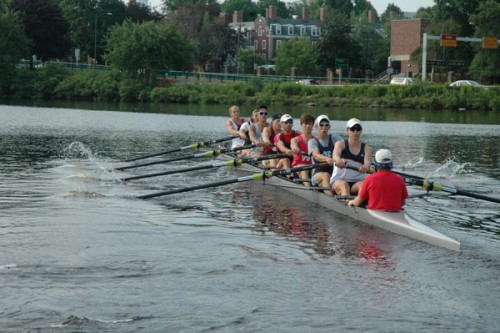 My college search was almost over by the time I got heavily involved with Empire. As a result, I did not go through the standard recruiting process for swimming, and simply relied on academic merits for college acceptance. I got into Stanford in December, 2010. I knew I would not be able to swim there, but the school matched my academic interests well, and presented many opportunities that I was enthusiastic about. Westward ho!

I had plans to join to Stanford Masters swim team, with probably unrealistic hopes that I could train myself there till I was good enough to walk on to the Stanford varsity team. During the week of New Student Orientation, before I even could start swimming with the Masters, I heard that the varsity rowing team accepted novice walk-ons. I emailed the coach, went to an informational meeting, and on the first day of classes, I went to my first rowing practice.

Rowing (synonymous with “crew”) is not a widespread high school sport. It’s confined to mostly prep schools that can afford a boathouse, the enormous price tags of the boats, and access to body of flat water. As a result the recruiting pool is fairly small. Some teams resolve this by recruiting 23 year-old behemoths out of Serbia as “freshmen.” Others, like Stanford, fill some of their roster with walk-ons, some of them complete novices.

I was introduced to the erg, short for ergometer. Essentially, it’s a stationary rowing machine. You’ve probably seen them in a gym. Every sport has its unpleasantries, but I dare anyone to find a piece of practice machinery that sucks more than the erg. You sit on a small, sliding plastic seat, and row for whatever length of time and at whatever rate the coach prescribes. The standard pieces we’d do at Stanford were 20 minutes, two to four of them in a practice, at varying paces, mixed in with spin bikes and other dryland exercises. Sometimes we’d go as long as 60 minutes in a single setting. You stare at a small, mounted screen in front of you that displays your strokes per minute, pace, time elapsed and distance rowed. It is extremely boring, and can become very painful. While completing a hard set in swimming, tiredness is usually defined by total-body fatigue, burning in the triceps, and a need to breathe. On the erg, tiredness is centralized into the tremendous inferno that builds in your quads, since rowing most emphasizes those muscles.

Erging was not everything though. Most of our morning practices and some of our afternoon workouts were spent actually rowing out on San Francisco Bay. I didn’t know this before I joined the rowing team, but it turns out that swimming is about the best physiological preparation that exists for rowing. Swimming builds your anaerobic threshold, cardiovascular stamina, lung capacity, and overall body efficiency. These traits are critical to making a good rower. However, being tall also is a major component of being good at rowing. I’m average height for an American male, 5’10”, but I was literally the shortest athlete on the team. Most of my teammates were between 6’4” and 6’8”. However, the athleticism, attitude and determination I developed in the pool gave me the ability to be competitive among most of the freshman.

We occasionally did erg “tests,” where you row a certain distance literally as fast as you can. They are the most physically and mentality exhaustive challenges I have ever undertaken. With the preparation and power I’ve developed through swimming, my two kilometer erg score was close to the USA lightweight national team standard within four months of joining the team. Stanford has no lightweight men’s team, only heavyweight, so although I qualify as a lightweight if I wish to compete for the USA, I must row with the heavies at Stanford. 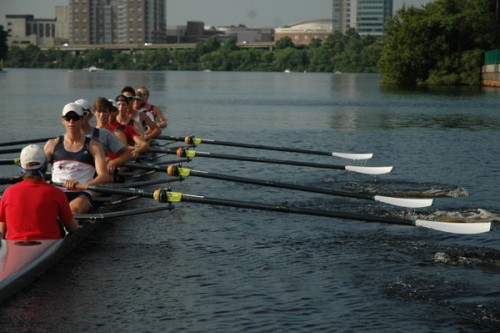 Men’s rowing is not governed by the NCAA, but instead it is unofficially governed by the Intercollegiate Rowing Association (IRA), which holds a championship in early June. This regatta is regarded as the collegiate national championship by all major rowing programs. Through my training and steady improvement throughout the year, I was able to secure a seat in the Freshman 8-man boat that went. Of the 8 rowers in the boat, five were recruited athletes, two of which had been high school national champions and another who had won gold at the junior world championship the previous summer. The remainder was composed of another walk-on who had significant rowing experience in high school, a sophomore who had red-shirted his freshman year after walking on, and myself. While we had hoped to do better, we placed 9th out of the 17 schools that had qualified for that event at nationals in June 2011.

Swimming, which helped prepare me so well for rowing, remains excellent cross-training. It also helps keep me sane, since I cannot imagine having to use the erg year-round. I’m not as smooth in the water as I used to be (and I’m not saying I was the smoothest swimmer even in my prime!), but it is still a great way to build my cardiovascular fitness and stay in shape for rowing.

A lesser-realized benefit of swimming for rowers is injury prevention. Many more people get injured in rowing than in swimming. The constant torque on your back literally rips muscles and bones out of place. Stress fractures in the ribs and herniated discs are extremely common, and can often end an athlete’s rowing career. The best way to combat this is to strengthen your core, so your muscles are strong enough to hold everything in place. Constantly having to maintain your body position while swimming does a superb job at developing these muscles. Swimming in the summers may prevent an injury that could make me miss all of the rowing season.

The transition between these two sports has been remarkably smooth. When I arrived at Stanford, I was extremely disheartened that I wouldn’t be able to swim. I hadn’t realized how much of my identity was infused with swimming, and I greatly missed the team environment as well. Rowing proved to be a superb alternative— something I was anatomically not ideal for but because of the athleticism built through swimming, I could adapt to. Based on the success I had this year, it is a plausible goal for me to try to make the lightweight national team by 2013. Swimming prepared me for this, and will, of course, continue to play a role.

Will Robins is an American Studies major (with an emphasis on the cultural impact of Western expansion) and a geology minor. “American Studies is a very interdisciplinary major encompassing history, politics, writing, art, historiography,” said Robins. “I like to think of it as a way to show how history is relevant to today. In high school I enjoyed history and science, but frankly my favorite part of Greeley was the swim team.” 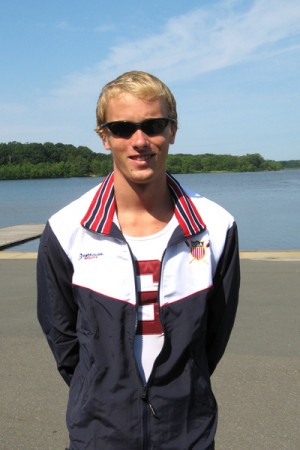